As we celebrate 25 years of touring, education, and community engagements we're sharing our memories from this incredible journey so far. See where we've been, what we've achieved, and what we can continue to do with your support.

25 years – I wouldn’t even know where to begin to pick through the memory vault. Except to say that all my memories are visceral. The deep feelings of playing great music with friends while traveling the world from Queensland’s own Texas to Lincoln Centre in New York, to meeting new people along the way is indescribable. It is a privilege to carry 25 years worth of these feelings while still making new ones. And there are many, many more to come.

Over 25 years Topology has grown into an Arts organisation employing over 50 Artists and arts workers each year, yet the reason we do what we do has not changed. We started as a band of 5 friends (6 including sound-man Brett Cheney) playing music together for the sole purpose of connecting people through creative experiences and because we loved it.

Everything we do evolves from our ethos of social connection through creativity. We believe that every single person is creative and should have access to these experiences, no matter where they’re from or what their skills are.

As we celebrate 25 years of Topology in 2022, we invite you to donate what you can so that we can continue to do what we do best on and off the stage. 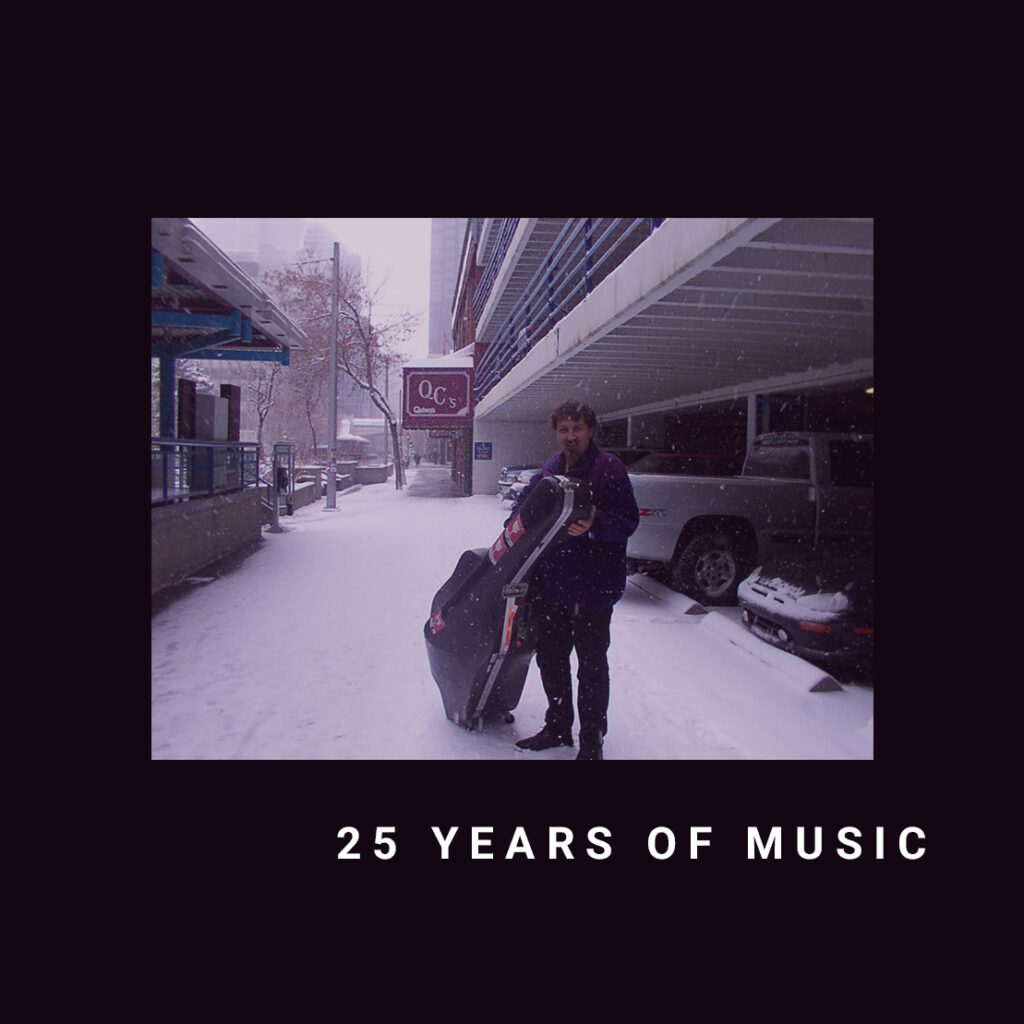 “In 2003, we toured Canada with guitarist/composer Tim Brady. In Calgary, we appeared on a TV show where the topic just before our segment was what to plant in your garden now that summer is nearly here. Through the window as a backdrop, snowfall was clearly visible. It was freezing. I wanted to walk to the venue, being what I thought was very close to the accommodation, and invited Brett to come with me. It turned out to be quite an adventure traipsing through heavy snow carrying the bass, taking turns to heave it along. We had a great, big audience in Calgary in the Performing Arts Centre. I took my 3 year old daughter Julia the next morning on a bus to Banff where we were thrilled to see wolves, chipmunks, caribou, deer, beavers and gophers, and Julia was ecstatic at being able to make her first proper snow sculptures.” 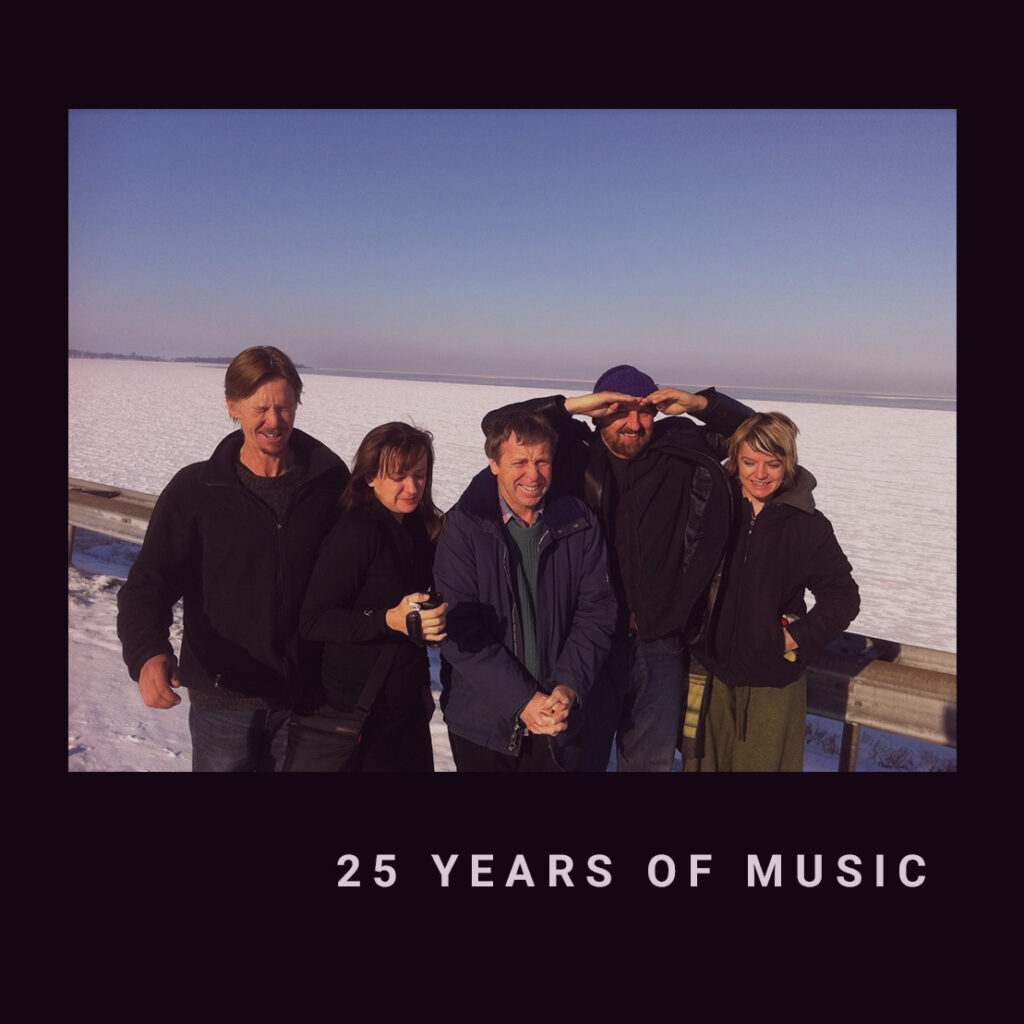 “We went to Holland and Belgium in 2012, and for me it was an absolute revelation regarding the greatness of their beer. I was pretty much in beer heaven, as I was introduced to all these amazing varieties that one rarely encounters in Australia, and the Belgians do it better than anyone else, pretty much. So, I thought I wasn’t going to let a good opportunity escape me, and I went all around the shops buying all this heavenly beer for only 1 or 2 Euros each. I ended up with about 36 stubbies, and I individually bubble wrapped them all. They wouldn’t all fit in my suitcase, so Christa kindly offered to put some in her bag. My suitcase was very heavy though, as most of the beers were in there, and I was worried about it being overweight, and having to pay excess baggage.

I turned up at the airport, they weighed my bag, and sure enough, it was way overweight, and I was told I had to get rid of things, otherwise I would have to pay around $230 AUS for excess baggage. Rob told me I should definitely just “jettison” the beer, but I wasn’t going to sacrifice it in a million years, it was way too valuable. So, I ended up having to pay the excess.

The good side of the story though was when we arrived back in Australia. As usual I had to fill in the arrival forms, and answer the question concerning whether or not I was bringing in more than 1.5 litres of alcohol. I thought that it would be foolish to lie about it, as I could so easily be busted, and then heavily fined, so I decided I had better tell the truth. When the officer looked at my form and saw that I had ticked more than 1.5 litres, he asked me what I had in the suitcase. I told him I had 30-odd stubbies of beer that I had bought overseas. He said to me: “Hang on a minute, I’ll just go and check with my supervisor.” I was expecting him to come back to me and say that I would have to pay a huge import tax, but he came back a minute later and said: “It’s ok, you can just go through, no need to pay any taxes”, which was very kind of him. He must have felt sorry for me. Or maybe he also loved great Belgian beer.” 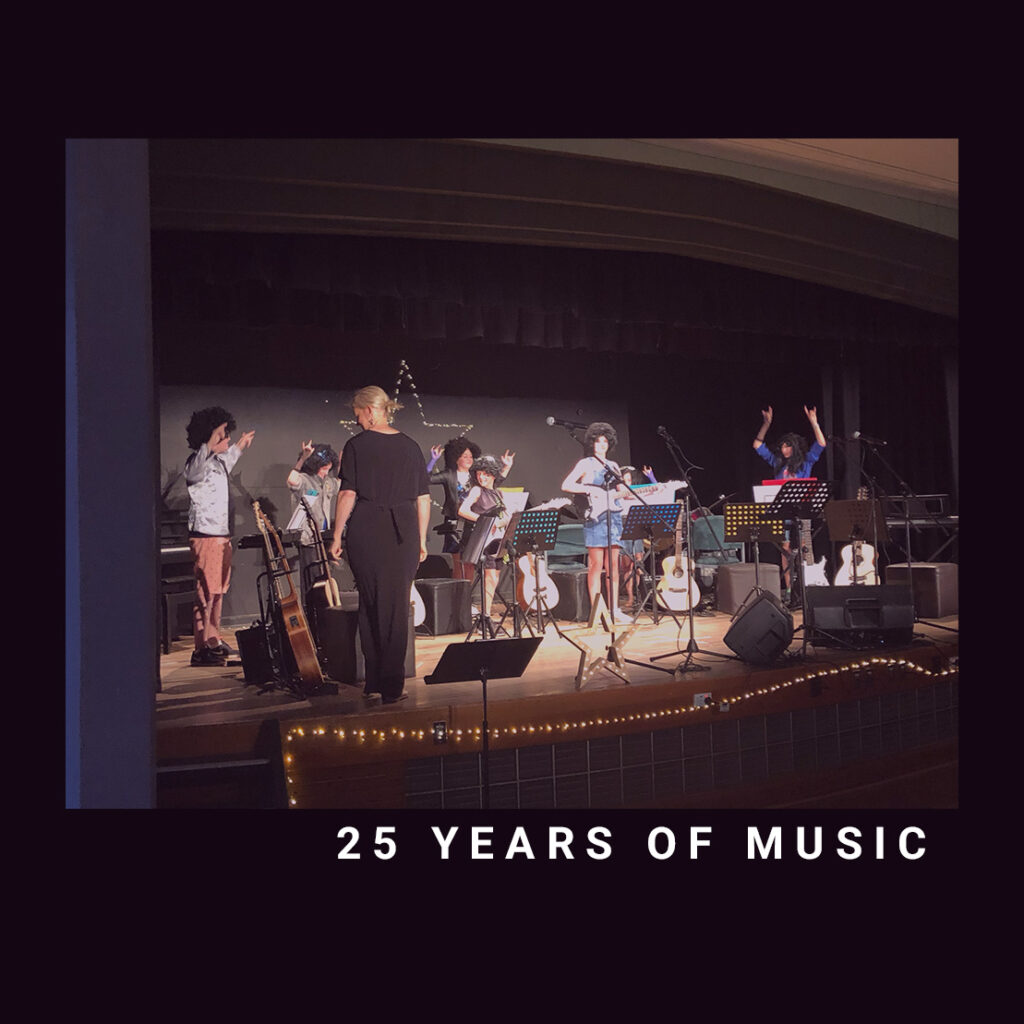 “A memory that will always stay with me is Topology’s visit to Texas in 2019 to assist with putting on our first full scale community concert. Witnessing the transformation from solitary novices to active band members, playing to a captivated audience was a life changing experience for musicians and community alike. The faces of my music students and community musicians were unforgettable. The joy and pride they were able to experience as a result of playing with and being guided by professional musicians was a community binding, unforgettable moment. “ 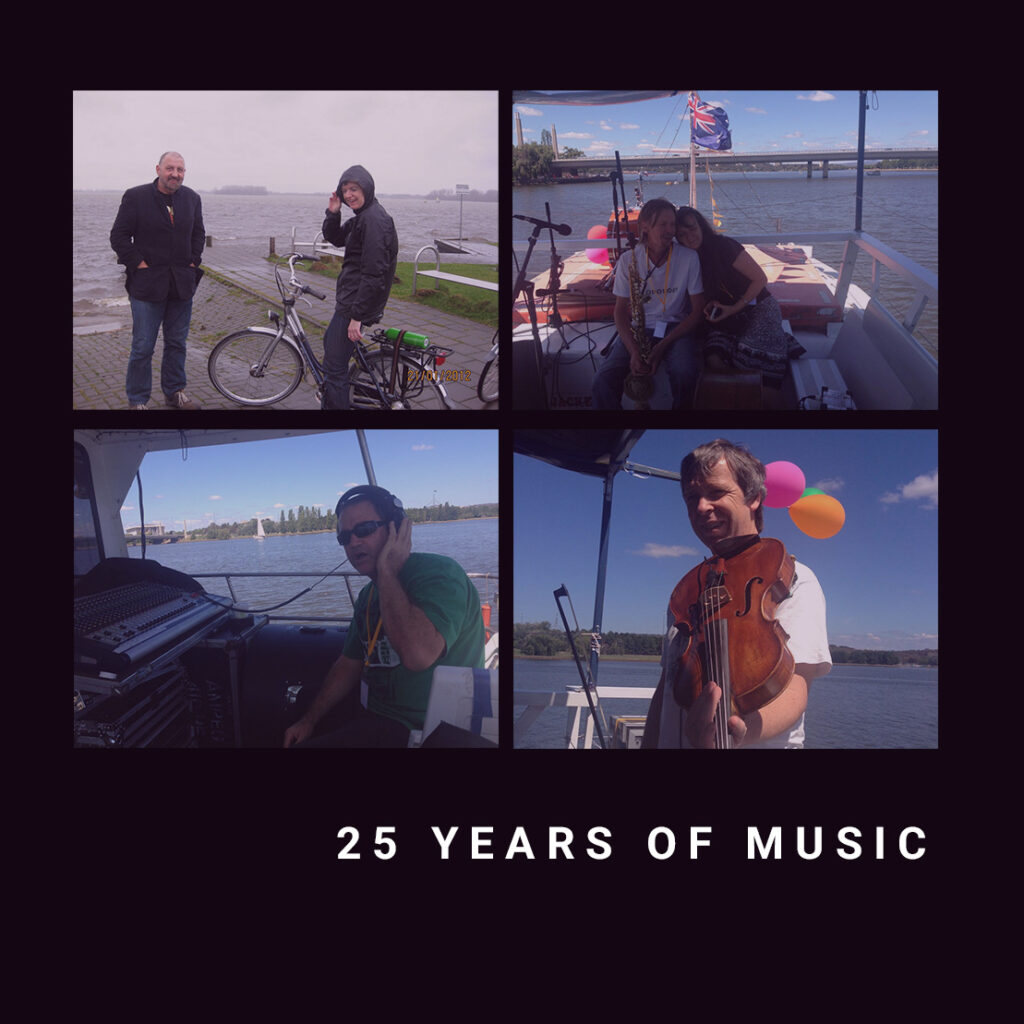 “One of the real travel highlights in the time I’ve worked with Topology since 2009 was definitely the three week tour of the Netherlands and Belgium with the Kransky Sisters. We set up a base in Nunspeet and travelled most nights to the show, returning to our homes in the snow, with John powering along at the wheel, Rob learning Dutch and the rest of us half asleep. So many stunning theatres, sometimes less than 100km apart, with great audience support.  This photo (TOP LEFT) is Rob and I embracing the cycling culture but battling with the cold, wind and rain.

The other photos are from the weekend celebrations marking Canberra’s 100 years of being Australia’s capital city.  It was one of Topology’s more unusual concert platforms – on a boat with Rob, Bernard and John playing Exterior on repeat as we circled around Lake Burly Griffin.  We were involved in several concerts that weekend, and it was an honour and real buzz to be part of this festive weekend.” 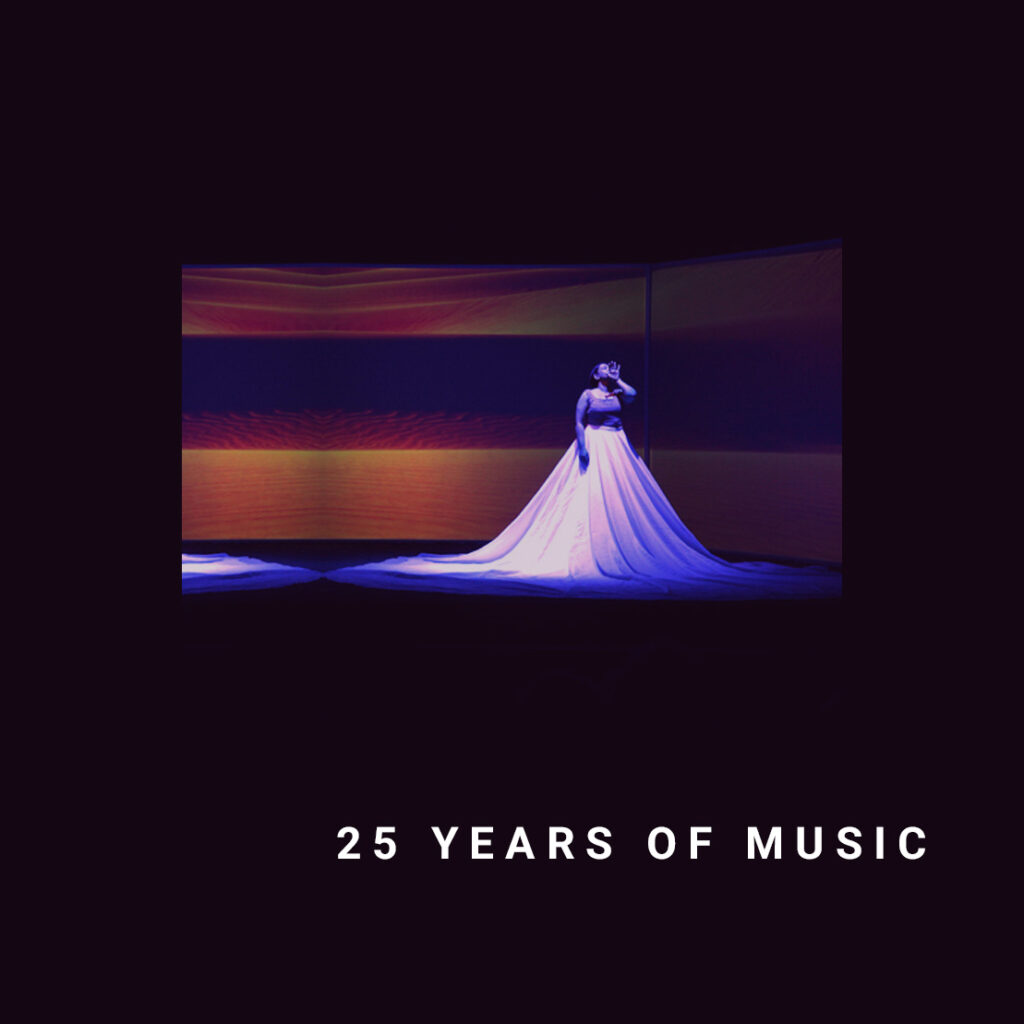 “The first time I properly worked with Topology was as the Stage Manager for the pilot season of “The Lady from the Sea” at Brisbane Powerhouse back in February 2012. This infamous production of Henrik Isben’s play “A Dollshouse” – the brain child of the then Artistic Director, Andrew Ross (vale), delivered a poetic adaptation performed in Malayalam text, that brought out actors from Abhinaya Theatre Company of Thiruvananthapuram, a town in Kerala, India, and team them up with western theatre producers, designers and animators at Brisbane Powerhouse, and of course, completed with Topology playing Robert Davidson’s “Sagarakanyaka” as live accompaniment. This production was a HUGE challenge to coordinate, given there was no English script, no definite score as the piece sections were cycled to the ever-changing pace of the cast adlib choreography… and of course, the cast did not speak much English either! Nevertheless it all happened with much humility, many peace offerings and lots of thinking outside the box of usual theatre conventions. The show was then toured to India (without myself), with many stories of food mishaps, missing persons and crazy barn shows.. all now folklore.
Fast forward almost a decade and I find myself touring regularly with Topology, as their Lighting and AV tech, looking after their concerts, creative development projects and creative workshop bootcamp projects! It’s been an honour working with them, seeing them evolve as a musical ensemble, as composers, as an arts organisation and as a cultural beacon.”
DANIEL ENDICOTT
Lighting Engineer 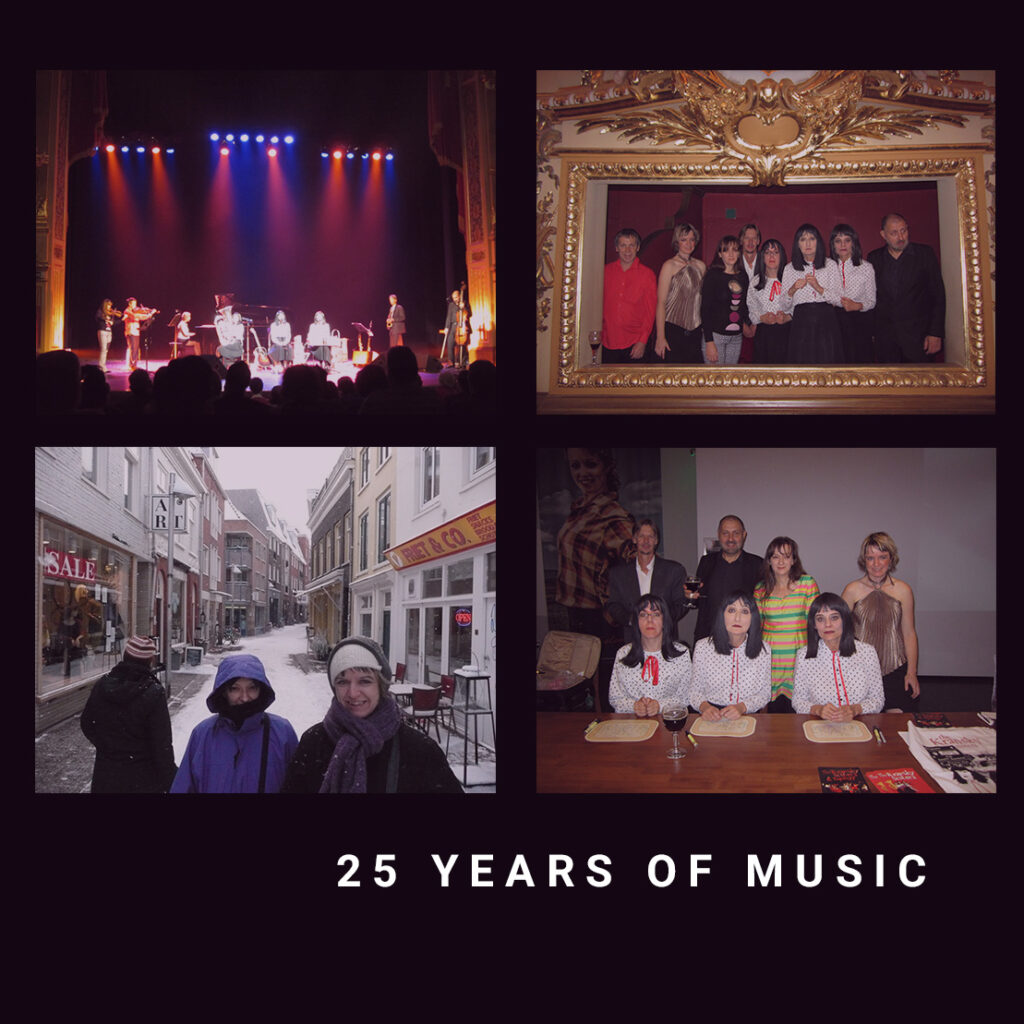 “Back in February 2012 we travelled through the Netherlands and Belgium with The Kransky Sisters and Topology for their show De Ontmoeting (The Encounter). It was very cold and we travelled many, many kilometres performing 15 shows over 3 weeks. All I can say is that it was so much fun – despite the cold.”
LEILA MAURAN
Production Manager

“My fond memory working with Topology is seeing the community come together in Texas performing their song written all about living in their town. Their shared memories of hardship overcome collectively was a beautiful proud moment. You could sense the togetherness in the room in that moment.” 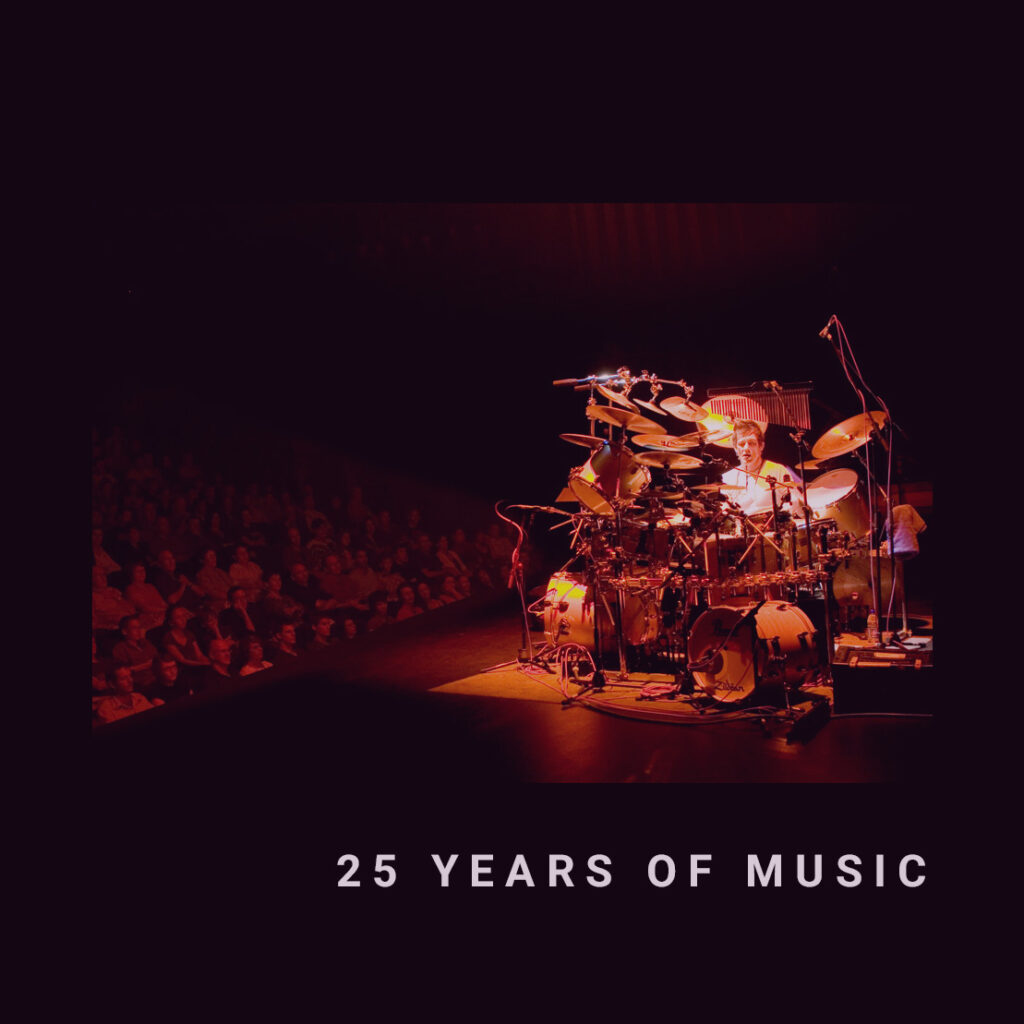 “I have many fond memories of my collaborations with Topology over the past 12+ years.

One of my favourite memories is the first time we came together. I’d seen the group play a few times and thoroughly enjoyed the rhythmic focus within their compositions. I would often think about how awesome the music would sound with drums.

I remember receiving the music scores for some of the pieces that we were going to do for the show. I love writing drum parts so was super excited to get into it. I started with John’s Tourbillion composition. I really enjoy using all of my limbs in drum parts so play an Afro-Cuban Bembè pattern with my feet to lay down an accompaniment bed for the piece and then I could catch all of the odd groupings and other figures that the various members were playing with my hands.

Every song that I’ve done drum parts for has brought a new challenge and a great opportunity to explore!

I still love writing parts for new works that the guys send through to me.” 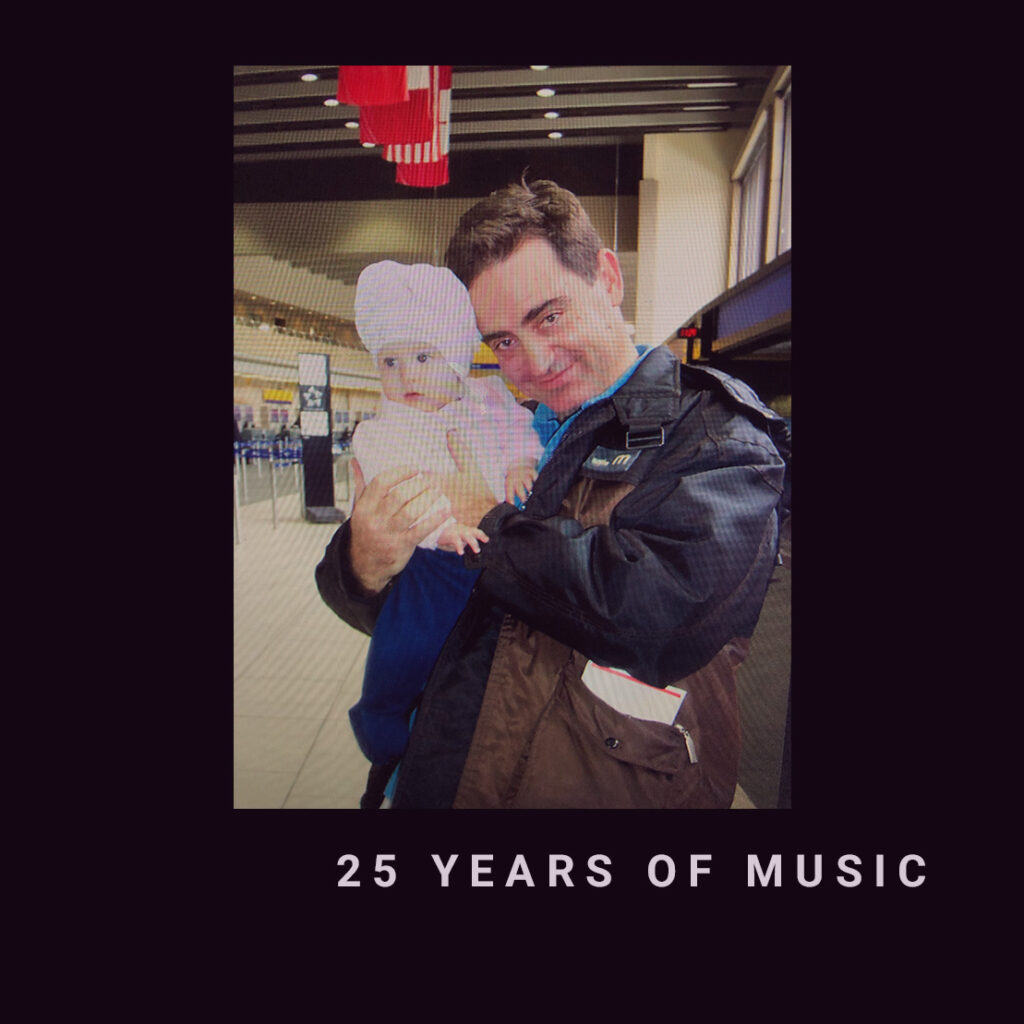 “Here is a story that has two sides to it… my side Brett the sound engineer  and Christa our lovely violin playing  boss, I will let the reader decide on the one they want to go with.

It was my first tour with Topology some 20 years ago. I could not believe my luck getting to go to Canada with this great band I had just started working for. Not only were they the best, I could tell they are all super nice people. Great musicians and it’s more or less classical music, so my ears were not going to get blown off my head night after night. Plus, they are all grown-ups so no staying in half burnt out squats which had been the case with some other bands I had toured with back in the day.

With all that in mind I was keen to do a great job and be as useful as I could trying to guarantee my position with this new band. Our flight was long – Brisbane to Vancouver, and as you could imagine we had a lot of baggage and instruments. Christa had only just given birth to her first-born baby girl Lilly and had bravely taken her on this trip. As we stood outside Vancouver airport in the cold night air waiting for our ground transport surrounded by baggage and instruments, I thought here is a chance for me to be the useful employee, the indispensable tour guy. As one of the cars pulled up, trying to be helpful I asked Christa “Can I take that for you?” gesturing towards her violin parked on the ground between her feet. She almost yelled “NO, take this!” and thrusted the small bundle of Lilly she had been carrying into my arms, then picked up her violin case and got into the car. I have since found out that her violin is well over 300 years old and in the 20 plus years working for the band, I have never touched it. I learnt a lot that cold night in Vancouver. I have told this story in public before and to this day Christa says she was only joking and if you are reading this Lilly, I am sure that is true.”