With little or no rain over the past month, very dry conditions exist across South West Queensland. Dust storms are expected to hit large parts of Queensland this Thursday, April 30 and will be a timely reminder that the drought is not over and COVID-19 is not the only urgent crisis we currently face. 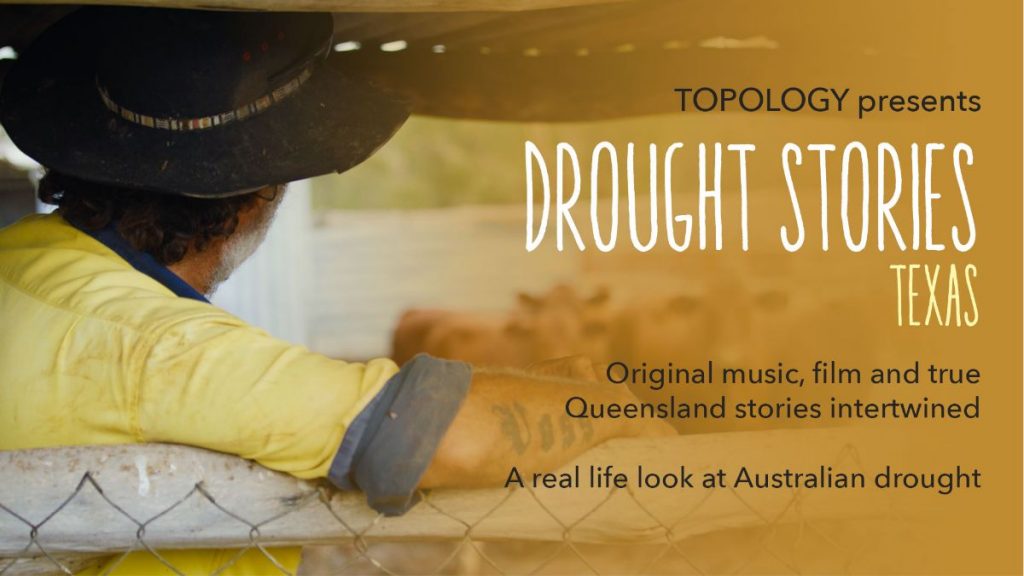 “Water is life, isn’t it? If you don’t have water, there’s no life of any sort."

“Water is life, isn’t it? If you don’t have water, there’s no life of any sort,” – Bernadette Guymer, Texas farmer. Bernadette’s words highlight the deeper environmental and economic emergency facing many regional families and workers.

The stories of Texas, South West Queensland, are featured in this World Premiere first instalment of a Topology produced seven-episodic multi-media project. Entitled Drought Stories, the work delves creatively, using multi-media including documentary and audio clips, into the climatic hardships faced by individuals and regional Queensland towns from the long-form drought of the last five-years.

Announcing the World Premiere of Drought Stories Texas, John Babbage said, “Drought Stories Texas is a new work that has evolved from my personal involvement over the years with the communities of Texas, Stanthorpe, Dalby and Longreach. I have been personally touched by the strength and resilience of the people of these towns. This resilience, however, is tested, and the stories of dealing with this, is something that both myself and Topology want to share with audiences – particularly in the larger cities. This multi-media project grapples with diverse themes and layers of, how we respond to and deal with drought, including politics, economics, philosophy, and issues of living on the land. Topology and I have worked and created in these communities for many years, working on a mutual trust that we can share their stories through music and film, something that cannot be gained by a single visit.”

Drought Stories – Texas has been released by MGM Distribution and is available for purchase, along with its accompanying sheet music at our online store.